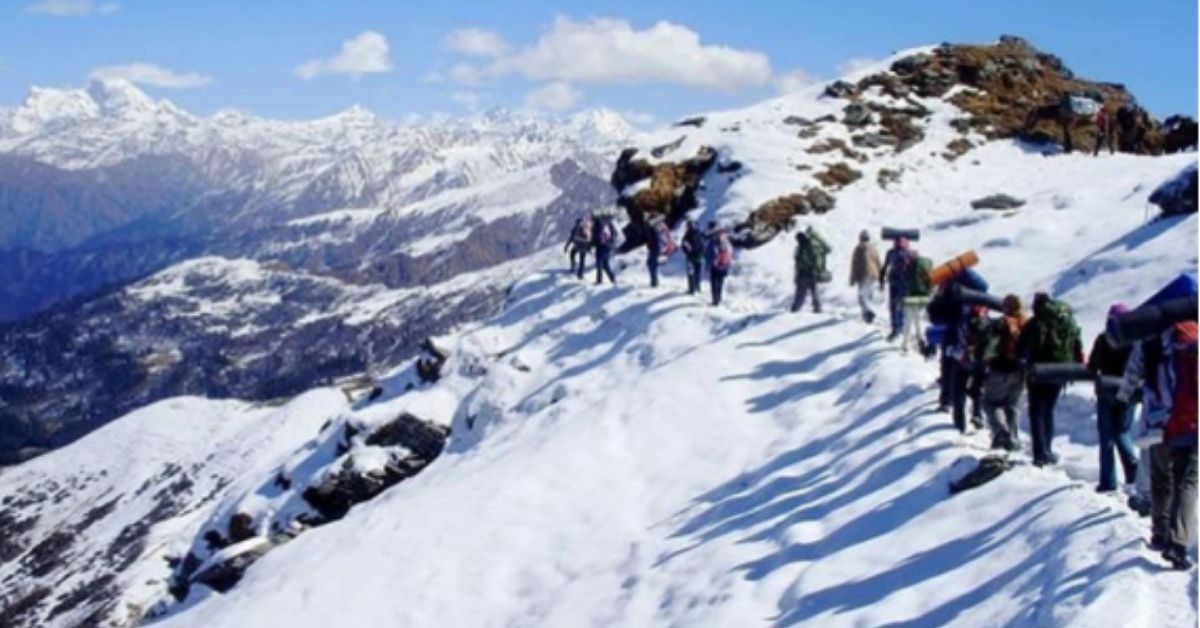 Having a break is always relaxing, but filling that with an ounce of thrill makes it bliss. The long laid stretch of the Himalayan range is a repository of many beautiful treks. Having a wide cluster of mountains the Himalayas are packed with some of the highest peaks in the entire world.

Kedarkantha trek is a hiking destination that is located in the garhwal at sankri, it offers a view of about 13 peaks of the Himalayas. Raised to an altitude of 12500ft above the sea level, the entire distance of the trek is about 20 km and is graded as a moderately easy trek. The best time to take up this trek is during the peak of winter,  when the entire place is covered with pearl white snow, enchanting its beauty to the next level. The trek awaits to unfold its hidden beauties as you hike up through the snow-laden pine forest. The 360° view of the pristine summit is just jaw dropping and you get to witness the magnificent Himalayas from the peak. This trek can be your best bet and any beginner and novice trekkers can take up this eye pleasing trek.

Nag Tibba trek is a perfect weekend trek near Mussoorie. Having its base camp at Pantwari  this trek doesn’t even push you to take an off from your work ,you can go on this trek in an absolutely sublime 2-day amidst the Garhwal region of the Himalayas. Nag Tibba is a pure delight for the  beginners who would like to venture into the world of adventure.

Being a  famous trek for all mountaineers, Sandakphu trek is graded as a moderately difficult trail. Sitting at an altitude of 11,929ft on the singalila ridge, this trek can be taken twice in a year, both times mesmerizing you with unique experiences. This trek is located in darjeeling along the Bengal- Nepal border, it also has its peak in ilam.

During the trek , you’ll come across some seasonal wild flowers, forests, rhododendrons and magnolias. You’ll also get to see the peaks of Everest,  kanchenjunga,  lhotse and makalu all from the top of the sandakphu summit.

This trek takes you through the trail filled with wild flowers like sedians, lilies, poppy,daisies, geranium and petunia. Taking this trek during the months of July and August offers you the best experience in that monsoon time. Not only that, the enchanting hemkund lake lies at an altitude of 4300m and has a river gliding through the middle of the valley with snow covered mountains on the slides and the flowers spreading in between.

Lying at a maximum elevation of 4000 mts above sea level, this trek is rated as one of the easiest treks and a beginner friendly  trek. A mere walk of some kms will take up the trail , however the climb to Chandrashila peak from the shrine can strain your legs. This trek can be attempted from April-June and from October-December ,but the snow falls makes it a little tricky.  This trek is accessible from Haridwar or ukhimath.  Chandrashila means moon rock and many stories revolve around this trek. Considering one of the sacred places where lord Rama meditated after the war with ravana. This trek will present you with the 360° panoramic view of the great Himalayas. Along with that you’ll also get to see the nanda devi kedarnath, nilkanth and panchachuli.  All along the trail, this will give you pure bliss and stunning views.

Situated at an altitude of almost 10000 ft kheerganga has its base camp at barshaini. Having 2-3 ways to hike up to the peak, most people prefer the way through Nakthan village. The locals believe that lord Shiva’s son murugan mediated here for almost 1000s of years. This therapeutic camping about the top of Parvati valley under the starlit sky is a sample of mental peace. Kheerganga trek can be taken up anytime during the year, but winters make it a little thrilling to fulfill the expectations of an adventurous trekking experience.

Walking up through the forests ,along the beas rivers, you’ll come across waterfalls and shrines.  On reaching the top you’ll be gifted with the tremendous view of the great Himalayas along with the bath in the hot springs or the parvati kund.

Lying at an altitude of almost 13,846 feet high above the sea level in Solang Valley, Manali, this Trek is a moderately difficult trekking experience.

Starting from Solang Nallah near Manali it goes through the Alpine grasslands to narrow ridges and then to the moraine paths and finally through the densely packed oak and Pine forest. On  Reaching its peak you will come across birds and some spot species like Monals and pheasants.

On Reaching the peak you will also be astonished by the panoramic view of the Kullu valley and the peaks of hanuman tibba and friendship peak towering above all other peaks . You can keep our expectations high to witness the breathtaking view.

Starting from its base at  McLeodGanj  this trek is considered as one of the easiest treks. Lying at an altitude of 9760 feet above sea level this trek is popular amongst the novice trekkers. With its Striking views of dhauladhar range on one side and the winsome kangra valley on the other side, hiking up the mesmerising trail hardly takes 3-4 hours for beginners. The comfortable terrains and the high ranges welcome you. on climbing up you’ll come across bhagsu nag waterfall from where the trail gets steep. The sun crawling down behind the mountains and rising up again from behind is a  view for a lifetime which can’t be missed out.

The trekking experience with moderate level of difficulty, the kareri lake trek starts from dharamsala.  This trek takes you to the glacial kareri lake, which is formed by the water running down the minkiani peak. From Dharamsala it will take 25kms walk  to kareri village and an addition of 6 more km to liyoti village for a night stay. Early the next day you walk through the densely packed forests and then hike up the step that accents along the kareri nallah and nyund nallah. from there you will go through some Alpine fields, wooden bridges and cross rivulets to finally reach the kareri lake in minkiani pass. In that absolute emptiness and silence, the lake reflects its beauty with an ancient shiva temple blessing the beauty.

Having a difficulty level of easy to moderate and located in the region of Raithal, dayara bugyal trek is a lovely and easy climbing trek experience. It fills your eyes with the abundance of Snow,  this relaxing Trek presents you with grand Returns. Flaunting its Meadows with shimmering  white snow it stands tall ,bold and flawless.

This trekking experience is tireless and completely beginners and family friendly.

Situated in Raithal, this trekking experience is rated as easy to moderate.  The stunning view of the two celebrated mountains, Mount Trishul and Mount Nanda ghunti will make you feel paralyzed. It also presents you with a bird’s eye view of the Roopkund trail. This trek is a lifetime experience with the Grand showcase of snow all around. Most of the mountaineers rave about this snowy experience from the trek. It tests you physically with some of its  good climbs .

Having its base camp situated at sankari, this trail is believed to be the path that pandavas followed in their way to heaven according to the Mahabharata. Har ki dun literally means the “valley of gods” , going through this trail, you’ll get to witness the swargarohini, bandarpoonch and black peak all at the same time.

Located close to the mount. Nanda devi, kuari pass trek has its base camp at auli. This jaw dropping trek is located in the most remarkable regions of garhwala. It presents you with the view of mount Nanda devi, that redefines the meaning of what it is to look larger than life.

Having its base in Aru, this trek  goes on to  your bucket list, not just because it presents you with the experience of camping right beside the three mesmerising alpine lakes but it’s also Kashmir. One way up the hike  is not enough to feel filled by this lively beauty.

Breaking the image of honeymooners roaming hand in hand through the ever crowded mall roads in manali. The bhrigu lake trek in Manali is a different level of delight. Located just 24 km away from the main town and by golly, it has its base camp at Guyana. You get to witness the drastically changing  scenery and will feel like you are in a totally different universe.

Simply desire to say your article is as astounding. The clearness to your post is just spectacular and i can suppose you are an expert on this subject. Fine along with your permission allow me to take hold of your RSS feed to keep up to date with imminent post. Thank you one million and please continue the gratifying work.

I like this site because so much useful material on here : D.